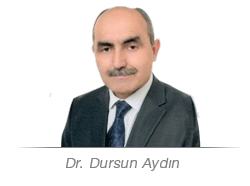 Born in 1966 in Konya, Beyşehir, Dr. Dursun Aydın completed his primary, secondary, and high-school education Manavgat district of Antalya, the tourism capitol of Turkey, and finally graduated from the Medical Faculty of Atatürk University.

He served as supervisor physician at the dialysis unit in Erzurum SSK (Social Security Institution) in between the years of 1993-1996. Having resigned from the public sector in 1996, he established the first private public institution of the east in Erzurum together with a couple of his colleagues. He served there as the Board Chairman of the Company, and Chief Physician of the Hospital for ten years. He paved the way for our compatriots working in Europe to obtain service from the private hospitals when they were to come to the region on their leaves as from 1998. 1998 thereby witnessed the establishment of the health tourism in Turkey. In 2005, he transferred his hospital entrepreneurship in Erzurum, and resumed his career in Ankara focused on health tourism consultancy and home care services. After settling in Ankara, he paced his works in the fields of health tourism, elder care, and home care. In 2005, he established Turkish Health Tourism Association. After getting back to the public sector in 2009, Dr. Aydın served as the Director of Ankara Public Health Laboratory, then as the Assistant Director of Ankara Provincial Health Directorate for a short time until 2010.

Dr. Aydın resigned from his position as the Department Chairman in 2014. He thereafter decided to resume his activities in the fields of Health Torism and Educational Tourism at NGO-level. In this respect, he founded the International Patient Services Association and the International Student Services Association. He recently paced his NGO activities particularly in the foreign promotions of Turkish universities, and enrollment of students from abroad to Turkey. Currently serving as physician in the Ministry of Health, Dr. Dursun Aydın is married, father of three children, and knows English and Arabic.